Thread Screen 2009. Photography by Tobias Titz. This screen was inspired by the pattern of western light passing through foliage, lattice, across a verandah finally resting on a speckled glass window pane. 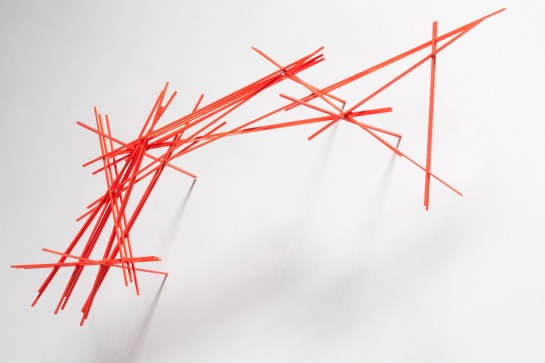 Mapping Occupation 2009. Photography by Jon Linkins. It is a record of the occupation of a verandah over the course of a day.

These two works included in Trace at Pin-Up Project Space were selected from the Where We Live Collection, made with the assistance of a 2008/2009 Creative Sparks Grant. These studies aimed to capture the qualities that enrich our lives in Brisbane and define the special places where we live. Many were informed by our unique light and use of space specific to our climate, views and places within the city.

A large part of the initial research for the  Where We Live project was photographic. In all, seven different places or ‘typologies’ were selected and researched for the project including ‘Up High’, ‘By the River,  ‘In the Centre’ and ‘Living Rough’. Only one of these ‘Living at the Edge’ was selected for final exhibition at Raw Space Gallery.

A Sister Work to Thread Screen is Light Study 2009. Photography by Christina Waterson.

Where We Live Installation at Raw Space Gallery 2010. Photography by Jon Linkins.

Raw Space Gallery located on Melbourne Street (South Brisbane) allowed 24 hour viewing of the works. This meant they were readily accessible to a wide diversity of people who both worked and passed through the area on a daily basis.

Both Thread Screen and Mapping Occupation 2009 were selected for TRACE because they are yet to be realised to their true potential. They are in waiting to still evolve and become fully.