With some exciting news to be announced in regards to Tracelet this week I thought I would REPOST about the Tracelet Project.

It’s been just over a year since the Tracelet Project (777 Limited) was launched at Brisbane’s Saturday in Design 2012 (SID). Over that time two colour editions have been released and I have personally given more than 700 Tracelet sets to people in Brisbane, Sydney, Melbourne, London, Hong Kong and Singapore.

That’s a lot when you think each time I give a set I also share the story behind the inspiration, the maker and the process. Tracelet can only be given in this way. 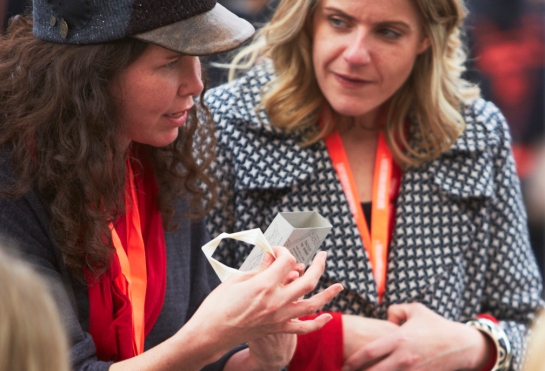 Sharing the story of the Tracelet Project at SID Melbourne 2012. Photo James Braund.

Something quite magical happens each time. Tracelet ceases to be a bracelet made of Injection moulded food grade plastic and instead becomes a talisman about the gift of sharing knowledge.

Tracelet has travelled all across the globe and found homes with inspired individuals. Sometimes they run into each other while wearing Tracelet and say ‘You must have met Christina!’. Such beautiful stories keep flowing in from all over the world.

I have received hundreds of thank you emails accompanied by images of people loving their Tracelets; wearing them for special events or in their everyday, or finding new ways to use them (drawing patterns or playing with them as earrings and crowns).

Thank you and stay tuned!