During April and May 2014 I was privileged to display Soft Cell (Domestic Bliss Exotic Dream) 2014 Edition within artisan’s Ivory Street Window, Fortitude Valley. A small preliminary study of Soft Cell was first exhibited in 2012 as part of my solo exhibition Trace at Pinup Project Space, Melbourne. This study was made in cork rubber. By this time other studies and tests of Soft Cell at a small-scale had also been made in leather, felt and fabric.

Soft Cell represented a deliberate desire to work with softer materials and forms. My Churchill Fellowship experience profoundly moved me to follow this softer approach, having predominantly worked with more linear and rectilinear geometric elements throughout my practice until that time. After my exhibition at Pinup Project Space I spent a busy year running around the countryside creative directing. There was not much time for making in the studio.

In 2013 I committed to realising Soft Cell at a larger scale in more vibrant colours and everyday materials. A successful application in 2013 to display Soft Cell (Domestic Bliss Exotic Dream) 2014 Edition in artisan’s Ivory Street Window got the ball rolling.

After spending many years starting with hard materials and hard forms I found the result more often than not was “hard”. I set to making with soft materials and soft forms with a hope to relax and make softer works. Christina Waterson 2012

Soft undulating rhythmic forms make up the Soft Cell family. Each generation of form, while unique, originate from the same simple element combined in different ways. Making Soft Cell required me to move differently; using softer and less controlled movements than those used to make The Komodo Series and Bloom Series. These softer circular movements used different muscles in my body. Within the work the compression and tension imbued in each form’s surface did require my concentration and some good timing.

A sample of the layout options considered for the Ivory Street Edition of Soft Cell. Illustrations Christina Waterson.

Soft Cell marked a shift from previous installations within the Ivory Street Window. My two previous installations within Ivory Street Window were more linear in nature. They were also made with a single material of predominantly one colour.  The Soft Cell 2014 installation could have taken an infinite number of layouts as shown above, in the preliminary sample options (L and C) for my original application. I decided on a geometric tartan layout (R).

The installation grew over time and evolved through a sequence of patterns. In doing this my hope was to draw people closer to inspect the work’s detail and form, and maybe ponder what the forms might remind them of, or how each colour might stir different memories and associations.

Vivid recollections and studies borne from a sense of rediscovering a distinctly Australian sense of nature and place are brought to light through this new collection. While the Domestic Bliss Exotic Dream Edition of Soft Cell uses everyday materials found in our homes, up close the materials’ colour, fluidity and overlay transport us to another place and suggest different flora, fauna and landscapes. One may see a hint of parrots, waves, jellyfish or a flourish of orchids in the overlapping arabesques. It’s these tactile curves and arabesques that form the essence of things – the soft cells. Christina Waterson Artist Statement 2014 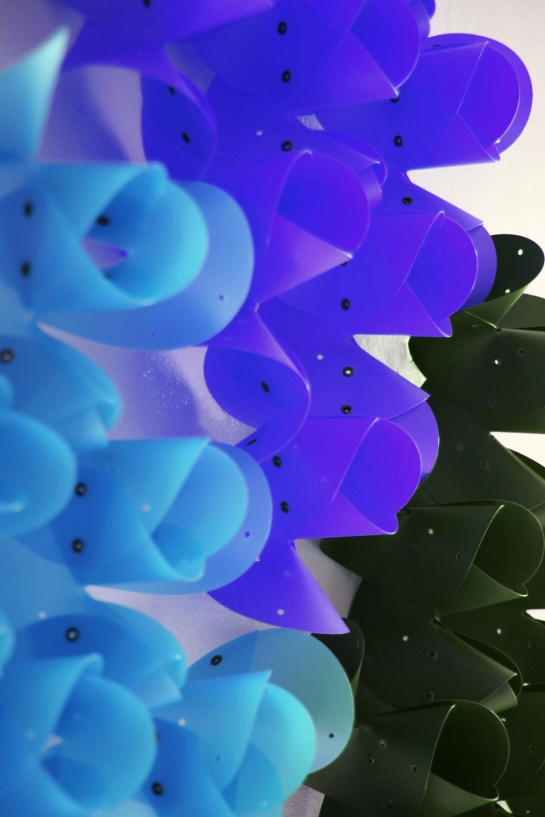 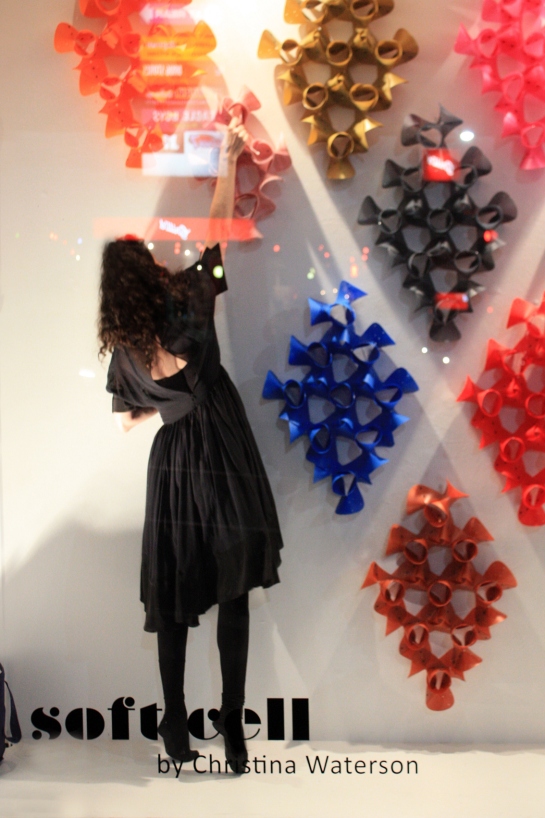 Tweaking Soft Cell on the opening night of the exhibition. Stage 05 of Soft Cell’s evolution. Photography Richard Stride for artisan.

My work continues on the Soft Cell family of surfaces and forms. STAY TUNED as this new collection truly reaches its full potential!